Frogs exhibit a great diversity of reproductive modes, from laying aquatic clutches of hundreds of eggs that receive no further attention, to complex parental behaviours, some of which are displayed by poison frogs (Dendrobatidae). These frogs take care of their small terrestrial clutches, and then take the newly hatched tadpoles to bodies of water where they complete their development until metamorphosis. In the dyeing poison frog, Dendrobates tinctorius, parental care is performed by males, and the sites chosen for tadpole deposition are predominantly tree-holes, where I have found between one and 18 tadpoles of this species at the same time. This is counterintuitive, considering the high incidence of larval cannibalism. It has been suggested that phytotelmata for tadpole deposition are a limited resource in the forest, and that is why males take tadpoles to occupied sites. But, what if the males could deposit their tadpoles in empty sites?

I carried out an experiment at Les Nouragues station (French Guiana) where I tested whether, given the choice of an unoccupied and an occupied container, fathers would choose to deposit their tadpoles in the unoccupied site. To my surprise, the larger the tadpole in the occupied container, the greater the probability of a male depositing its new tadpole in that container (Rojas 2014). This, which seems at first glance a strange parental decision, could not necessarily be a bad thing. A large tadpole could mean the presence of resources for tadpole development in a particular site. The new tadpole might be eaten by the large one, but if it is not, it has better chances to complete its development in a place with good resources!

I have teamed-up with three fabulous poison frogs researchers, Jenny Stynoski (Instituto Clodomiro Picado — University of Costa Rica) and Lisa Schulte (Goethe University Frankfurt) and Eva Ringler in a hopefully long-term collaboration that we have decided to name “Team Tadpole”. Our first joint project was a massive overview of amphibian parental care with suggestions of new research avenues. This review is now published in Herpetological Monographs. 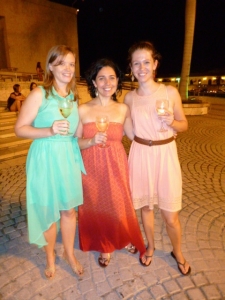