Many animals face a life in a multi-enemy world. In order to survive, they have evolved different defensive strategies that vary in their nature and efficacy. Aposematic organisms display warning signals that are coupled with some form of unprofitability, for example chemical defences. Wood tiger moths (Arctia plantaginis) are aposematic; males display conspicuous colouration in their hindwings (either yellow or white) and secrete defensive fluids from both their abdomen and their prothoracic glands. Previous work done by my colleague Ossi Nokelainen and his collaborators showed that white moths are more attacked than yellow ones. This suggests that yellow is a more efficient warning signal against predators, but nothing is known about how deterrent the chemical defences are and why. Although chemical defences are thought to be costly, wood tiger moths have two types of defensive secretions.

We investigated the reactions of two types of predators (ants and birds) to the two types of chemical secretions of A. plantaginis, when information on colour is not available. We found that these two types of  predators react differently to the two types of secretions! Ants were deterred by abdominal fluids, while birds did not care about them. In contrast, birds were repelled by the fluids moths secrete from their cervical glands, whereas ants even drink these fluids eagerly. To our knowledge, this is the first case of target-specific defences documented in an insect. If you want to know more about this study, click here.

In experiments with blue tits we aimed to determine which signal (either visual or chemical) is more important for predator deterrence in wood-tiger moths, or whether the visual signal and chemical defence have additive effects. For this purpose, we used fake paper moths with a nutritious lard + flour body that we coated with the moths’ chemical defences. Birds seem to easily identify our models as food!

It has long been assumed that most chemical defences in insects are sequestered from the plants they feed on, but we have recently shown that in these moths there is some degree of de novo production. In addition to that, we are studying whether or not these chemical defences are costly and, if so, what kind of costs these moths incur during their production and/or sequestration. We have found that females raised in food-deprivation conditions have less deterrent chemical defences than females raised in resource abundance. We are now interested in establishing whether female colouration (which varies continuously from yellow through to red) is an honest signal of the strength of their chemical defences, and whether males have similar patterns of resource allocation as those seen in females. 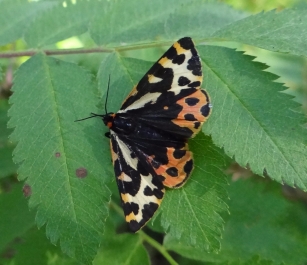 These studies are being done in collaboration with Emily Burdfield-Steel and Kaisa Suisto, and MSc students Morgan Brain, Miriam Furlanetto and Cristina Ottocento.